So, today, I bring to you the long awaited proposal story!

Happy one month to me and Preston for being engaged! After collecting all the pics and the videos and everything – it is finally time to share the story!

So I shared the story of how we met in the very end of October.

For some context for those who don’t want to click away – Preston and I met at a theatre called EPAC in 2014 while he was in a production of Cabaret and I was working in the front of house.

I sat in Row E, on the center aisle, with my best friend & roommate, Joe. After the show, I made Joe go home because he was too handsome and I was nervous that bringing a really tall and handsome man on our first date sent a bad message. He was a good sport and went home. Two nights later, Joe and I were sitting in our living room and I said, “I’m going to marry that guy.” and three years later…I’m right.

So let’s get to the night of:

Preston and I are both working on a production of Sweeney Todd at this same theatre. He was playing the Beadle and I was helping with costumes.

There were three weeks and eleven shows. During the third week, on the Wednesday night show (the anniversary of our first time meeting) – Joe told me he was coming to see Sweeney and I was so jazzed about that! So, I decided I would actually sit in the audience with Joe as kind of a fun throwback!

Preston reserved our seats. The same seats Joe and I sat in that first night three years ago.

A few days prior, Preston tells my mom to ask me to get a manicure with her so my nails are done. My mom calls me and says she wants to get her nails done and do I want to go with her? So my nails were perfectly done (which they never are!) because my mom took me ‘on a whim’ and encouraged me to get a gel manicure so it would last!

Let’s cut to the night of November 1st.

I was packing a bag with the thought that Preston and I might be spending the night at my parents’ house. I said, ‘What should I wear to the show tonight?’ as I ask most days and he says, ‘Why don’t you wear your new red dress?’ – and he hardly ever suggests anything specific, so I was grateful for the definitive answer, so I packed it!

He went to work, and I left to go get my haircut. (one of the pro’s of working at home, I can get a haircut in the middle of the day.)

I was going to get my haircut by the same hair stylist, Corinne, I’ve gone to since I was thirteen years old. Well, twelve years, a marriage, and two gorgeous children later – Corinne was no longer working in a salon so I usually go to Corinne’s house in her kitchen for a trim and some highlights (yes, I get highlights).

So, on this Wednesday, I showed up to Corinne’s house for a typical cut/color. Normally, Corinne doesn’t style it, she’ll throw in a cute braid and I’ll leave it in for the day. What I didn’t know was that Preston had sent Corinne a message asking her to subtly style my hair so I wouldn’t be suspicious but so that my hair would look great.

So after Corinne washes out my hair, she asks if she can style my hair because she misses doing fun hair-do’s in the salon and if I’m not in a hurry, would I mind letting her do something fun with my hair? I was NOT in a hurry – so I said, sure. And she gave me this gorgeous retro hair with a big front flip.

Corinne was perfectly sneaky and I was NOT suspicious at all! So, thank you, Corinne for your part in all of this! I appreciate it so much!

Then my mom asked if I wanted to have an early dinner because she and my dad were coming to the show that night (they see most of Preston’s shows, again, not suspicious!). So I went to have dinner with my parents and then I went on to the theatre and said I’d see them later.

I went to the theatre and everything was normal. No one was squirrely or weird. I tossed my backpack downstairs and putzed around until Joe arrived. We ended up chatting outside until VERY close to the show starting before we took our seats.

Intermission rolls around – Preston asks a friend of ours to come upstairs and get me and bring me downstairs to the dressing rooms, so I won’t see that Preston has completely stacked the audience with so many friends and family.

Again, I’m helping with costumes, so it seems normal that they might need me during intermission – so I went down and stayed ‘helping’ until the call for ‘places’ (for non-theatre people, right before the second act starts!)

I go back upstairs and sit down only a few moments before the lights go out.

Curtain call comes around and everyone bows and there’s lots of applause.

And then Preston steps out of the line and starts talking.

Well, I’ll just let you watch what happened next. (make sure you turn on the sound!)

This photo was taken by our friend Niki (who is a delightful gem!) and perfectly amazing and wonderful.

Preston, again, gem that he has asked TWO of our friends who were photographers to photograph the whole thing – which they did. (Thank you Lauren & Martha!)

AND double bonus, my dad had met a friend of mine (who is a reporter) and Preston’s at a networking event and mentioned that he knew Preston was proposing to me that night – SO THE LOCAL NEWSPAPER was there with a THIRD photographer.

We literally made the front page of the paper. (it’s a small town) 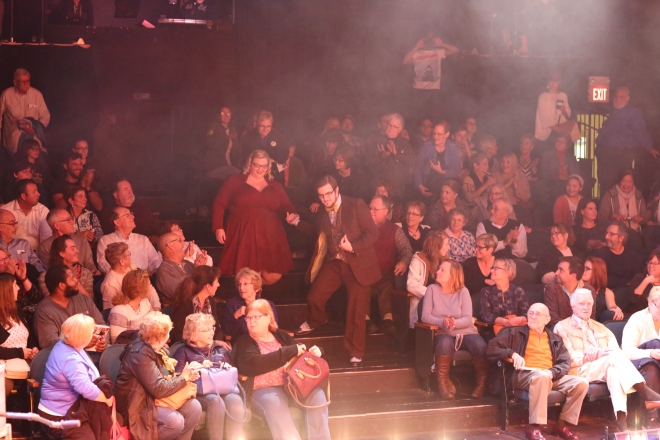 Also, featured in this photo – our dear friend, Karey (top in the brown!) who helped Preston mastermind this whole thing! Thank you Karey!

Also pictured, our friend Lauren (who is who I shoot with all the time!) taking photos IN her costume!

And obviously, I said yes!

Well, you can’t hear it in the video – but I told him that it seemed sensible.

Three years ago, after a few months of casual dating – I asked Preston if he could just be my boyfriend already. I was sitting on my bed in my pajamas. He was tying a tie. He, with a very serious face, told me that seemed sensible.

So when he asked me if I would marry him, I told him that seemed sensible too.

He laughed at that which brought me my favorite photo (above) from the night. Even in our biggest and most serious moments, we can still find moments to make each other laugh.

Then the lights came up and the biggest surprise of my life came. TONS of friends and family were in the audience, including my long time best friend, Abby, (since we were in 7th grade) who moved to Chicago last year. She flew home for less than 24 hours to be there.

Here’s a photo series of me seeing Abby for the first time. I literally screamed and then started crying. 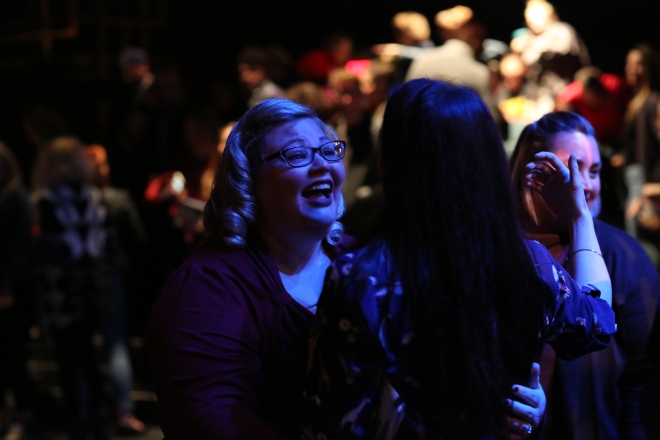 Abby will be my maid of honor at our wedding.

Cathy rounds out my trio of BFF’s (Abby, Cathy, & Joe) coming all the way from Philadelphia to be there for the night. She and Abby hid in the darkest and farthest corner of the theatre so I wouldn’t see her!

So Joe came from New Jersey, Abby came from Chicago, and Cathy came from Philadelphia. All three of them will be in my bridal party! (My fourth and final bridesmaid wasn’t able to make it that night but has sent a million good wishes!)

And here’s us with our parents:

And here’s a fun fact: I did help Preston pick out a ring. He can get overwhelmed by making huge decisions like that. I knew we were going to get married and that’s what marriage is. It’s a partnership. It’s picking up where your partner lacks. He’s indecisive and I’m SUPER decisive. I wouldn’t let some archaic rules about it being a surprise make him so stressed out that he was anxious all the time. That’s not a good precedent for a marriage. Partnership is partnership.

But when I helped him pick out a ring – I wanted one that looked like my Mom’s. I always thought her ring was very beautiful and we bought the ring from an amazing small business jewelry store from a woman who has been doing it for 40 years and is SO knowledgeable and she pulled out this estate ring and it was perfect.

But the biggest news of all?

I get to marry my best friend! 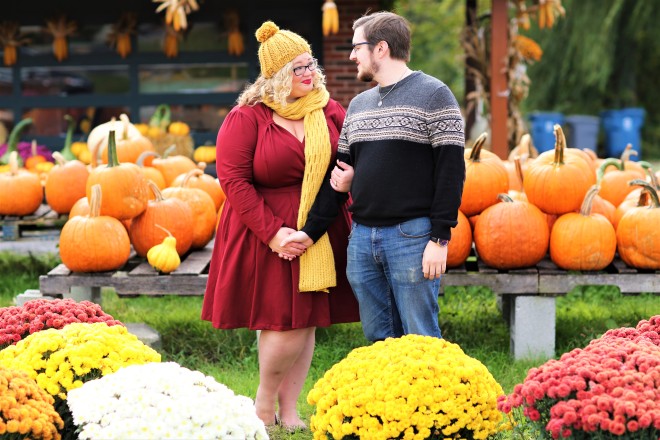 *This post may contain affiliate links & has the potential for earned commission. Some items used in this blog post were gifted to me for review purposes. All thoughts & opinions are my own.*

The next few weeks have some awesome stuff planned!

If you are at all interested in doing a collab or working with me – please feel free to check out my new Contact Me! page!

I definitely want to do more His & Her fashion. Do you guys like seeing Preston more?